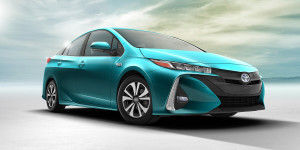 The Toyota Prius has long been one of the most fuel-efficient vehicles on the road, but the Prius is about to take a major leap forward. The much anticipated 2017 Toyota Prius Prime electric range has recently been announced, and it should be cause for excitement for anyone who wants to spend a lot less on gas and drive a lot more sustainably. Explore the details below, and get excited about the arrival of this ultra-efficient automobile later this fall.

The Prius Prime is a plug-in hybrid vehicle that will be able to travel up to 22 miles on a single charge. That is farther than the average commute to and from work, meaning that gas-free daily driving is now a possibility. It will also only take 5 hours to restore dead batteries to a full charge, so you don’t need to worry about plugging the Prime in the minute you get home. When you need to drive farther, the Prius Prime has a total range of 600 miles and gets 120 MPGe when using gas power – an improvement of 25 MPGe over the last model.

A number of engineering upgrades make this the most efficient hybrid ever put into production. The size of the battery packs has been doubled to make better use of electric energy, but the weight of the car has not increased significantly. The car’s lines, dimensions, front grille, and even windows have also been redesigned to further improve the aerodynamics. New tech features inside the cabin including an 11-inch touchscreen that empower drivers to closely monitor their energy consumption and make efficiency-boosting tweaks in any driving situation.

Embrace the Future of Driving

The 2017 Toyota Prius Prime electric range is not the only exciting thing about this car – it is also impressively stylish, roomy in the cabin and trunk, and loaded with cutting-edge automotive technologies. Plan on checking it out in person at Findlay Toyota located at 7733 Eastgate Rd, Henderson, NV.