Buying a midsize sedan is usually a practical purchase based on your everyday driving needs, but it doesn’t have to be just that—and the 2017 Toyota Camry is proof. Offered with commanding V6 power, paddle shifter, sport seats, and a rigid sport-tuned suspension, the new Camry gives you consistent comfort and convenience along with the power you want to have at your disposal. Get a full look at what this car can do on the road, and take it for a spin at Findlay Toyota in Henderson, NV.

The Toyota Camry is available with two different engines, both of which come mated to a six-speed automatic transmission. Here’s a look at how both of them perform on the road: 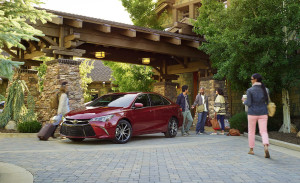 On top of its raw power, the Toyota Camry has also been designed by top engineers to deliver a the most sophisticated performance available. This comes in a variety of different forms, beginning with the aerodynamically sculpted exterior and vortex generators which help smooth out the flow of air. The steering system and Electric Power Steering system of the Camry have also been built for maximum agility. You’ll also have your choice between a comfort-oriented suspension and a more rigid sport suspension with recalibrated shocks, springs, and sway bars.

If you opt for the Sport or XSE version of the 2017 Camry, you’ll get a cabin that has been designed to maximize the performance experience. This comes in the form of sport front seats with robust side bolsters, as well as performance paddle shifters mounted to the back of the steering wheel that allow you to manually shift the six-speed automatic transmission—allowing you to go in for more aggressive gearing when necessary.

Now that you know the 2017 Toyota Camry is a lot more than just your average midsize sedan, you might want to come check it out to see how it accelerates and hugs turns on the road. The team at Findlay Toyota is happy to set you up with a test drive to experience the Toyota Camry performance in action, so stop in and see us at 7733 Eastgate Rd in Henderson, NV. We’re open Monday through Saturday from 8:00 a.m. – 10:00 p.m., and you can contact us online or give us a call at (702) 487-4339.