The 2017 Toyota Prius gets your attention with its incredible fuel economy ratings and accessible pricing, but you’ll also be impressed to see that it has garnered top independent safety ratings from both the IIHS and the NHTSA. It also comes with an abundance of standard safety features, from a driver knee airbag and rearview camera to Toyota Safety Sense P (TSS-P), a premium package of driver assist features like Lane Departure Alert and Automatic High Beams. After doing your research, find the new Prius on sale near Las Vegas and Boulder City at Findlay Toyota.

The 2017 Toyota Prius has proven itself to be an incredibly safe mode of transport according to independent crash safety tests:

The Toyota Prius has been equipped with the kind of hardware and other safety features you’re looking for to help prevent and mitigate the impacts of a collision. Every model comes with antilock disc brakes, front and side curtain airbags, a driver knee airbag, a front passenger seat cushion airbag, stability control, and traction control.

Toyota’s campaign to make it to the forefront of advanced safety benefits Prius drivers this year, as all versions of the Prius now come standard with Toyota Safety Sense P (TSS-P) an impressive driver assist safety suite that includes: 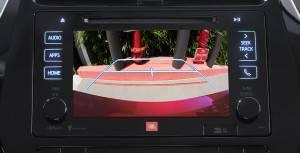 If you upgrade to the Prius Four or Prius Four Touring trim, you’ll have the option of upgrading to Safety Connect, and advanced telematics system that protects you when you need it with:

Experience Safety and Security in the 2017 Toyota Prius

If the many advanced safety features and top safety scores on the new Toyota Prius seem like a selling point to you, or if you’re just interested in getting a closer look, we invite you to take the trip from Pahrump or anywhere in the Las Vegas area to check it out at Findlay Toyota. We’re at 7733 Eastgate Road in Henderson, NV, and you can contact us any day of the week from 8:00 a.m. – 10:00 p.m.