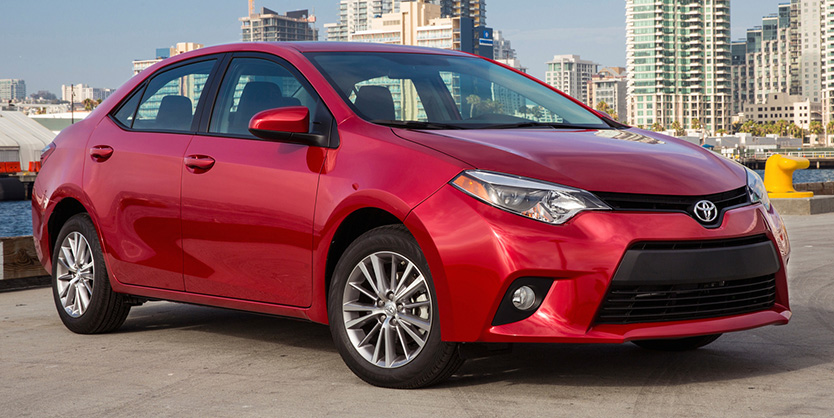 Why opt for the 2015 Toyota Corolla? Impressive fuel economy, versatility and excellent features are just a few of the long list of appealing qualities the Corolla offers. Here-s a closer look at what you-ll find in the newest Corolla.

Building upon the base L is the LE that gains upgraded features from heated mirrors to variable intermittent wipers and keyless entry to automatic climate control and cruise control. The sound system bumps to six speakers and includes a six-inch touchscreen display, Bluetooth phone connectivity, phonebook downloading capability and voice controls.

Jump to the LE Plus and LE Premium to get 16-inch alloy wheels, fog lights and sleek piano-black interior accents. The Driver Convenience package is optional on the Plus and standard on the Premium, equipping both with a sunroof, keyless entry and ignition, roof-mounted antennae, satellite and HD radio, navigation system and Toyota-s Entune App Suite mobile-app integration. The LE Premium also includes a power driver seat, heated front seats and premium vinyl upholstery.

If you-re going to spend any time behind the wheel of a car, you should definitely do it in a car you can feel safe in. Enter the 2015 Corolla that shows off solid safety equipment and excellent crash test scores. All 2015 models of the Corolla boasts stability and traction control, antilock disc brakes, front side airbags, side curtain airbags, driver knee airbag and passenger-seat cushion airbag. Also standard on all (excluding the base L) is a rearview camera.

In government crash tests, the Corolla received a perfect five star rating in overall protection and frontal and side impacts. In testing by the IIHS, the Corolla also received top marks in moderate-overlap frontal-offset, side-impact and roof-strength tests.

The interior of the 2015 Corolla is the most appealing offered thus far with a stylish dashboard, sporty flourishes and easy-to-use technology. The 6.1-inch touchscreen standard in all models, excluding the base L, is a consumer pleaser with large, virtual buttons, simple, clear graphics and quick inputs.

Space in the 2015 Corolla is more-than-generous, which is one of its top selling points. The 2015 Corolla provides a 3.9-inch longer wheelbase than previous models, which makes for considerably more legroom than most small sedans; headroom is also good. Loading and unloading cargo is a cinch with a flat rear load floor and wide trunk opening.

To make the 2015 Toyota Corolla your own, visit us in Las Vegas and Henderson, Nevada.