Get Ready for the Toyota 86 Redesign 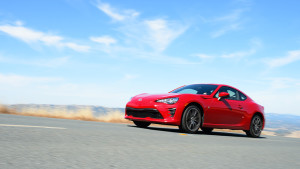 Toyota has recently brought back a revamped version of the Scion FR-S and reintroduced it as the 2017 Toyota 86. While this model offers up robust powertrain output and dynamic handling, it’s clear that Toyota wasn’t comfortable sitting around and waiting for something new. From what we know so far, the Japanese auto manufacturer is now at work on a total redesign of the Toyota 86, promising more of what driving enthusiasts want in a sport coupe. Find out more before it makes its way to Findlay Toyota.

What We Know So Far

At this point, we have a limited look into what the all-new Toyota 86 will have in store, but even early glimpses promise plenty of excitement around the corner. It looks like Toyota will be developing the new 86 model in conjunction with Subaru, which hints at the idea that this model will continue to be built with a flat-four boxer engine, delivering a balanced weight ratio for optimal, low-to-ground handling. The model is still in development, so we don’t yet have an idea what kind of specs we can expect from the engine under the hood. We do know, though, that Toyota will continue to offer it in a coupe-only format.

While Toyota is already starting to unveil its plans for the all-new Toyota 86, it doesn’t look like we should expect it to arrive anytime in the immediate future. Predictions at this point have it coming out sometime around the end of 2018 or the beginning of 2019 with a possible 2020 model year title.

There are a lot of reasons to get excited about the upcoming all-new Toyota 86, but current model of the 2017 Toyota 86 has plenty to offer. Starting at $26,975*, this dynamic sport coupe comes powered by a 2.0L flat-four boxer engine that makes 205 hp and 156 lb-ft of torque, which it sends to the rear wheels via a six-speed manual or six-speed automatic transmission. You can take the newest version of the 86 for a test drive today at Findlay Toyota, located near Las Vegas at 7733 Eastgate Rd. in Henderson, NV. Contact us for details.

*Manufacturer’s Suggested Retail Price, excludes the Delivery, Processing and Handling Fee of $835 for Cars, $900 for Small/Light Trucks (Sienna, RAV4, Highlander Gas, Highlander HV, 4Runner, Tacoma and Venza), $1195 for Large Trucks (Tundra), and $995 for Large SUVs (Sequoia and Land Cruiser). (Historically, vehicle manufacturers and distributors have charged a separate fee for processing, handling and delivering vehicles to dealerships. Toyota’s charge for these services is called the “Delivery, Processing and Handling Fee” and is based on the value of the processing, handling and delivery services Toyota provides as well as Toyota’s overall pricing structure. Toyota may make a profit on the Delivery, Processing and Handling Fee.) Excludes taxes, license, title and available or regionally required equipment. Price plus tax, license, dealer installed accessories, document preparation charge of $495, and finance charges and smog fees (used vehicles only), where applicable.

Look Out for the Toyota 86 Redesign